With these apps, a few good YouTube playlists, some simple flashcards, and a library card, you can teach your little ones to read, write, do basic math, and basically know everything they need to know for kindergarten. Children’s brains are primed and ready for learning at a young age…much earlier than we would think. They crave stimulation, they love learning, and they need to be challenged in their zone of proximal development. All of our children have learned to read at a young age, and technology definitely played a role. (*I do think it’s important to set limits and have routines in place with technology use.)

In my opinion, most of the good apps out there are designed specifically for iOS devices, and I have made a note for each app that can only be used on an iOS device. I know the price tag on Android devices can be tempting, but if you want to have access to the most and the best apps, I highly recommend getting an ipad (like this ipad 4 for $345 or an ipad mini 1 for $235) over any other tablet.

It can be somewhat challenging to teach a youngster how to use a touch screen at first. If your child is struggling with the concept of a touch screen, one of the things I have done is opened up the Starfall site on a computer and had the children touch the screen (pretending that it was a touch screen) while I controlled things with my mouse (hidden away of course). The best thing to do though, is to just sit down and play the games together. I recommend doing this anyways with all new games until they are familiar enough with them to play them on their own.

So without further adieu, these are the apps that I have used to teach my children the fundamentals of reading, math, and more.

If you only get one app, get this one! It covers all of the letters of the alphabet (names and sounds) in one fell swoop. (Unlike ABC mouse that focuses too much on one letter at a time in isolation.) When you click on a letter, it shows both the upper and lowercase versions while saying their names. When you click on the letters, they say their letter sound, and then you click the green arrow to progress through a series of examples showing things that start with that letter along with simple and engaging animations.

The simplicity of the app is absolutely beautiful, and I love the way kids have to click various things to progress things along. Unlike a YouTube video (which can be great too), this gets kids engaged every step of the way. I love how there are little sparkles around where the child needs to touch (or click on a computer). It’s a very good way to teach children how to use touch screens.

This app (and the other Endless apps) are designed for a bit of an older child than the Starfall apps, but I love introducing my children to higher level content with some guidance. This app does a wonderful job of teaching not only letter sounds, but how letters come together to form words, and what those words mean. 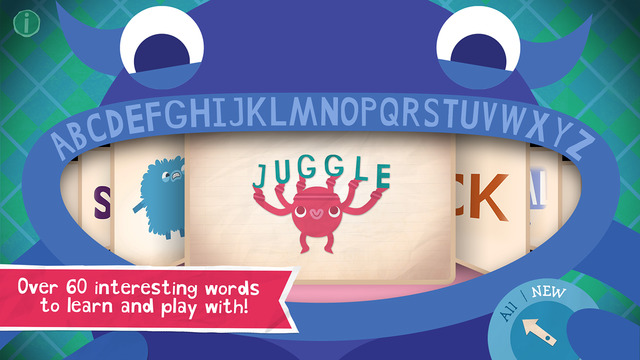 When you open this app, you’ll find a variety of vocabulary words sorted alphabetically. After you select one, you first have to spell it by dragging the letters to their shadow (each letter is personified and makes its sound as you move it), then the meaning of the word is acted out by cute little characters that look they have been hand drawn on lined paper. This is very entertaining app, and all of our children have loved it!

Just like learning to speak, learning to read, and learning how to do math, there is a logical progression to learning music. This app teaches notes, pitch, rhythm, and melody using beautiful landscapes and peaceful sounds. In one section, you can practice these music skills and in another you can make and record your own musical ensembles.

This game is GREAT for teaching phonics! You can choose from one of 44 sound clusters (i.e. short a, long e, oo sound, etc.) or from the other four word series of increasing phonetic difficulty (simple words with three sounds, words with consonant blends, words with digraphs, or words of any complexity).

When you choose a category, a picture pops up next to the number of boxes needed to spell the word. The word is spoken and the alphabet is listed below (all of the vowels are blue and the rest of the letters are red). The letters needed to spell the word are highlighted, and the other letters are faded. You drag the letters to spell the word and it is sounded out and read out loud. As you transition to the next word, you get to tap the screen and interact with some fun animation. My kids don’t usually enjoy playing this game on their own. It is more of a teaching tool that we sit down and use together.

This is a great app for teaching letter names! Every letter that you select is molded into a creature that starts with that letter. It is surprisingly mesmerizing to watch.

When you press play, it brings you to the letter A, then you can swipe to the left to go through the whole alphabet or go back to the main menu. It also has four different games (find the letter, find the animal, spell a word, and puzzle) and an autoplay feature that will automatically progress through all of the letters. You can also get this app in Russian. *This app is only available for iOS devices.

This is an app that will not only teach the ABCs and alphabet vocabulary, but is something that will unlock a certain whimsical wonder in the mind of all users young and old alike.

The adventure begins with all of the letters on the main screen. When you select a letter, say A for example, every tap of the finger brings about another action. After several movements, the letter name is said and with each subsequent tap it moves a little more and one by one more vocabulary words are revealed such as antlers, arch, and amble. To go to the next letter, you click on the star in the top right hand corner to go to the next letter or you can click the shapes in the top left corner to go back to the main screen. Metamorphabet contains NO in-app purchases. *Available on iOS devices and PCs only.

This is basically just a collection of all of the Storybots ABC songs. Each song is about one minute long and cute little robots sing about each letter of the alphabet. In the app, you can select a letter from the main menu, or just progress through the letters alphabetically.

You can also download this app that will give you access to all of their learning videos. The only problem is that these apps were free when I downloaded them awhile ago, but now it seems that you have to pay a $4.99/mo. membership fee which I don’t think is worth it at all. In doing so, so will get access to all of their printables too though which is nice. If you don’t want to pay the membership fee, just check out these playlists on YouTube…for free! *These apps are only available on iOS devices.

If your child likes Dora, these apps will be a winner for sure! If not, you might want to skip them. 🙂

In the uppercase, lowercase, and uppercase and lowercase letter games, you use Tico’s airplane to get nuts and trace the letters. Writing letters is more of an advanced skill, so this might be better for the older preschooler. I really like the letter and picture match game the best. In this game, you have to find the pictures that start with the featured letter. *All of the Dora apps are only available on iOS devices.

For the remaining apps, I didn’t want to do a full on review, because I think that the six apps and their affiliates that I’ve covered above are more than you’ll ever need, but these are apps that we have downloaded and enjoyed as well.

If you use these educational apps in moderation as a teaching tool for your children, it can greatly enhance their learning experience. Teaching your child at home doesn’t have to be overwhelming and you don’t have to wait until they are in kindergarten to teach them how to read. Please check out my free reading resources to help you teach your child how to read.

A Monster Art Project
#3-Learning How to Read Begins with the ABCs
How to Build a Sandbox
How to Make an Outdoor Teepee
Examples of Learning Goals That I Use with My Children
Why Do Leaves Change Color in the Fall?
How to Start a Homeschool Routine During Covid-19
Why We Are Giving Technology a Break
2 replies